A downloadable game for Windows

Are you skilled enough to face frequent deaths, survive deadly traps and avoid scary enemies? Enjoy an ultra difficult classic 2D platformer with a dark story! Master your special abilities, enter an alternate reality, and clone yourself to get through 21 hardcore levels!

And join our newsletter:

I really like this game and the macabre aesthetic!

this game actually has a lot of promise and I will definitely be looking into the full release.

It hits me as a combination of limbo (an obvious comparison for all dark 2D games now) and Fran Bow for the dual dimension mechanic. That’s not a bad conparrison either, it’s really enjoyable!

Reply
No Gravity Games4 years ago

Thank you for your feedback :)

Also,  the full version of Dream Alone is available on Steam:

(╬ﾟ◥益◤ﾟ) Angry ASMR they said. Get past the giant spider they said.. Why not

(excuse my angry tone)
Reply
The Fringe4 years ago

I really love this game, It's reminiscent of Limbo, but has a whole sort of rage quit vibe.. Really good

Played your game on my series, Indie Game Roundup (starts at 17:16 if embed isn't working). Very promising so far!

this game is awesome!! so many deaths its unreal XD the thing where you can enter the other world was awesome!! really creepy yet awesome!! great job on creating this!
Reply
allensgameshow4 years ago

Just played, I really like the Monochrome style it typically works well with games of this caliber. Here's my video

(,,꒪꒫꒪,,)Sure, let's visit satan and cthulu's dark realm why not.

you weren't kidding about the difficulty! I'm very curious where the story is going to go tho :3
Reply
Raithias4 years ago
I feel like i'm playing Mario all over again but, this time i'm way older and, the setting is dark and, gothic. The  theme is no longer cheery but, bleak. It's a great platformer. I think it's borderline rage platformer with how many times I died and, tried again.
Reply
EyeDisconnected4 years ago(+1)(-1)
This Demo was on point. i was very entertained throughout the game. I only recorded a few parts of the game so other gamers can experience this product themselves. the artwork is outstanding. the intro pulled me in. Great demo and im excited for the full release
Reply
HaydenRaven4 years ago

Dream Alone is iconic in how it has scripted and built its own world. Although the Demo was only five levels, it challenged me harshly throughout every minute of playing. I love the music the player meets as soon as you open the title screen, it inspires and is reminiscent of cultural themes such as the twisted nature of Lewis Carroll's Wonderland, with a horrific touch of gore. This game is beautifully dark, I absolutely admire the black and white style with what appears to be taken from the early 20th century film. This feature ages the game for the player, subconsciously creating an even more disturbing environment. I was only able to experience the 39th dead world with the red bar, however looking at the page now I am curious as to what the blue bar would do. Everything about this game is perfectly sound, the jumping and timing hold the player accountable, while the environments and enemies are somewhat predictable with trial and error.  I love the free soundtrack I accidentally happened upon, and look forward to listening to what appears to be a horror opera/drama. I'm really glad this was fully developed and out on Steam. Best of Luck to a veteran Development team. This game is immersive and awesome, DOWNLOAD THIS FOR YOURSELF! 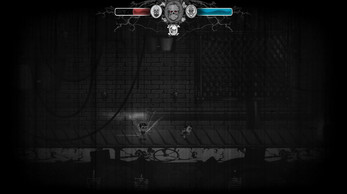 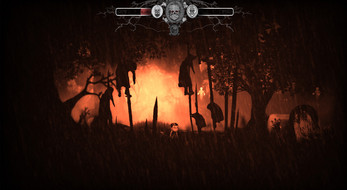 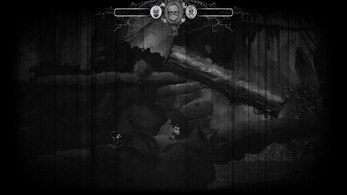 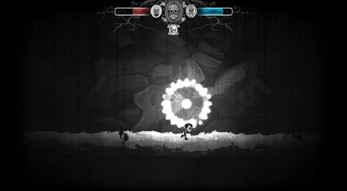